Notes about the Donders Discussions 2017

Donders Discussions is a neuroscience conference organised by doctoral researchers from the Donders Institute. This is the first neuroscience conference I attended as a PhD candidate. The venue - De Hamel, Nijmegen - is a perfect location for such conferences given it’s carefree atmosphere and proximity to a beautiful landscape. It was enriching to sit through sessions about the problems in neuroscience which I do not deal with on a regular basis. I guess it will take time for that information to register in a useful context.

There were 16 sessions (4 sessions running parallely in a group, 4 groups), 4 keynote speeches, and 2 poster sessions over the two days of the conference. I attended some of them and am writing about the interesting bits here.

He talked about developing therapy for brain disorders. I am sure this a big sub-field of neuroscience. The best part was about developing neural cultures with particular gene knockouts mirroring the knockouts in particular disorders. The synchronisation of the resulting spiking activity was analysed and they could find distinct activity clusters for the different disorders, as seen in his slide below. 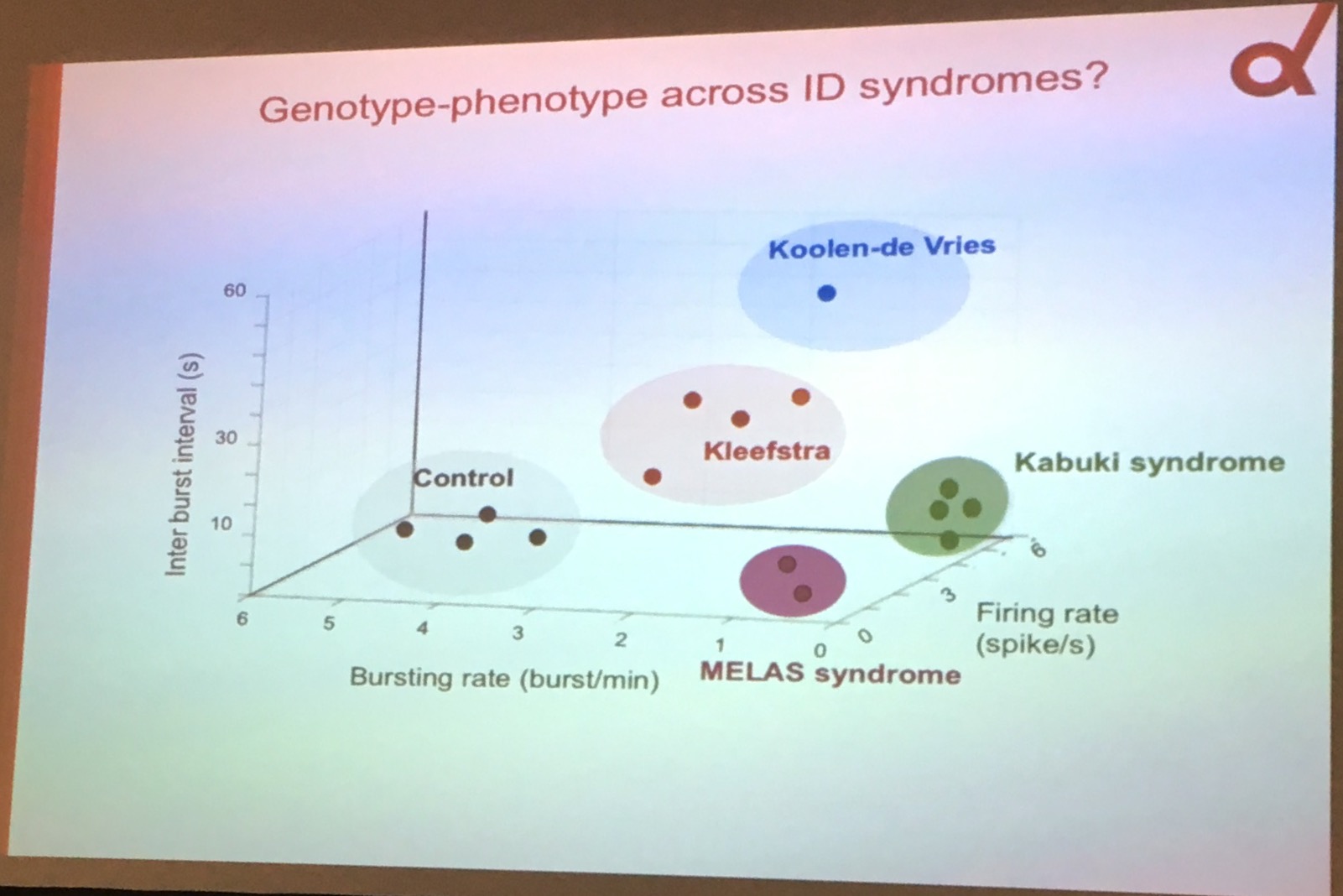 He suggested that by generating targeted therapies for normalising the activity patterns in these cultures, we could develop therapies that could transfer better to humans than from research on mice bred with similar knockouts.

He’s a philosopher who deals with philosophical questions regarding consciousness, free will and the relationship between cognition and culture. He started out by describing the historical shift in perspective about what constitutes cognition (embodied cognition, etc.) It was fun until he claimed that neuroscientists do not account for interactions with the environment while thinking about cognition and its development. That is not true at all. As such, I talked about that with him and it seemed he wasn’t aware of the recent literature which deals with the relationship between cognition and culture (read: effects of language on cognition, etc.) I hope we cannot generalise this to all philosophers. I guess it would have been better if he would’ve focussed on the consciousness and free will parts - parts where I’d say neuroscientists have little or no clue what to do and would appreciate any new perspectives.

There were 4 sessions running parallely. I could attend one for each of the 4 groups.

Benedikt Ehinger : Filled-in percepts from the blind spots are judged as more reliable than veridically seen ones

This is a counter-intuitive finding. Subjects were presented with the stimuli shown in the figure below (from his paper), and subjects had to make a forced-choice about which of the two stimuli were more consistent in their orientations. 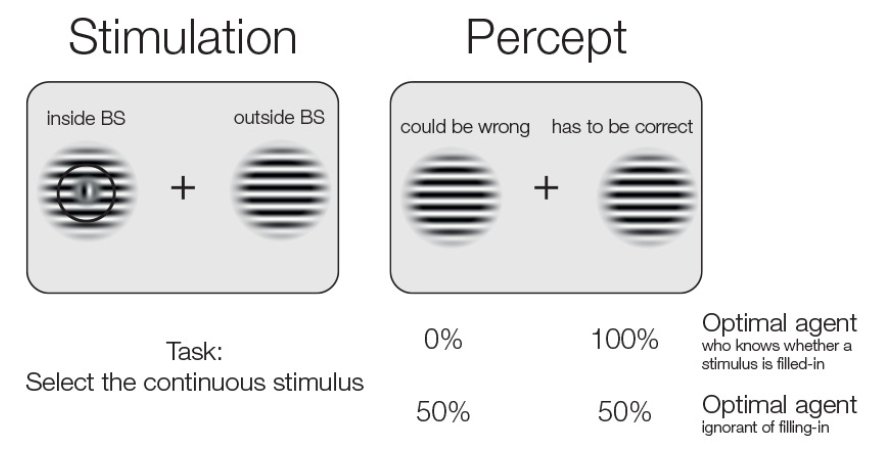 Why do we trust the information in the blind spot more in this case? His prominent explanation relies on predictive coding. The blind spot is filled in with information consistent with its surroundings. Now even if the surrounding input becomes noisy, the top-down filling won’t be as noisy, so the information received from the blind spot will always match the prediction, thus assigning more weight towards making a decision. This is also supported by their observation that subjects were faster in selecting the blind spot stimuli as opposed to the case where both stimuli were presented outside the blind spot.

Nadine Dijkstra : Perception as a restricted form of imagery

Using Dynamic casual modelling (DCM), she analysed functional connectivity profiles of four regions of the brain during perception and imagery, showing that both bottom-up and top-down information is involved in perception, and more top-down during imagery, as seen in the figure below (taken from her paper). 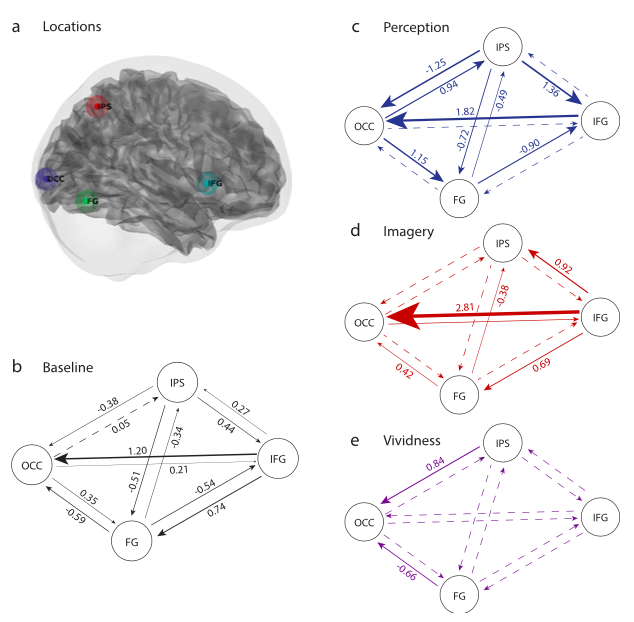 These results were expected given previous studies. I think it would be cool to model the same using known anatomical connectivity profiles between these regions. I find it very weird that the inferior frontal gyrus would be connected to the early visual cortex via a direct connection, and even if it is aren’t there other pathways which might be carrying the information reflected in the shown DCM analysis?

Cognitive maps and abstract spaces: the role of spatial neural mechanisms in other cognitive domains

Now, I know very little about grid and place cells, so this description might be naive. Grid cells are known to be involved in spatial representation and navigation. Alexandra’s work shows that the hexagonal grid code is not just for the spatial encoding of the environment but might be involved in the representation of any conceptual spaces. In the study, they used images of a stork-like bird whose neck and leg size was manipulated. In this two-dimensional conceptual space, they trained subjects to associate six bird shapes (evenly spread on a hexagon) with symbols so as to make them proficient in the differences. During scanning, they were shown videos of one bird morphing into another which could be thought of as moving along a line in the 2D space. What they found was the fMRI responses in the entorhinal cortex and other regions (similar to the case of spatial navigation) peaked when the movement directions in the 2D space were along the lines joining opposite vertices of some hexagon. This observation suggests that the conceptual space is being mapped with a hexagonal grid-like code!

Chih-Chung Ting : Incidental Anxiety enhances reinforcement learning for gains but not for losses

There was a weird, yet intuitive, aspect of human behaviour which was presented as a part of his work. Chih-Chung’s study builds upon the paradigm of Palminteri et al., Nature 2015 (introduces the factor of anxiety), and the relevant results are also seen in that paper. They presented 8 objects to the subjects with different levels of probabilistic punishment or gain, as seen in the figure below (from the paper). Now when two of these stimuli are shown, the subjects had to select one to maximise reward. The partial and complete cases refer to if the subjects were given feedback just about their choice or also about the alternate choice. Depending on these conditions, the subjects show a different response profile after training, as seen in the figure below.

The response during the ‘complete’ condition is weird - the subjects prefer low punishment over low reward! This observation is replicated in Chih-Chung’s findings. They suggest that we are reinforced to choose the low punishment more than we are reinforced to choose low reward. If one thinks about it, if given sufficient time, a rational agent would choose the low reward anytime. These findings reflect an automatic response it seems. This doesn’t seem to happen in the ‘partial’ condition though. (Have to read the paper carefully - maybe they have an explanation).